The painting “Nocturne in Black and Gold: The Falling Rocket” by James A. M. Whistler is relatable to the work of John Ruskin’s “From Modern Painters.” John Ruskin talks about how paintings are and compare painters to writers.  This painting is about fireworks while using abstract painting style, but John Ruskin states, “never expected to hear a coxcomb ask two hundred guineas for flinging a pot of paint in the public’s face.” Whistler sued Ruskin for damages of his painting and won, but the trail hurt him financially. Ruskin writes that artists’ art is just language and expresses how one feels and such, but yet damages Whistler’s painting. Whistler’s painting of the fireworks is something that the language he is expressing; but ironically, Ruskin damages it. 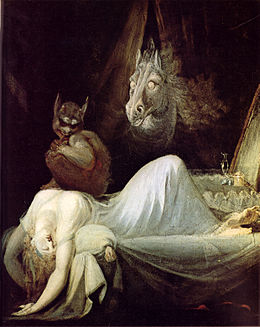 The artwork “The Nightmare”, by Henry Fuseli, reminds me of “Frankenstein” because of the scary feel it has and the involvement of a monster. The artwork of the nightmare shows horror through the death of a woman with a creature right next to her; also, the artwork has a dark background that makes everything seem more vivid. I can relate this to Frankenstein mostly because they both involve monsters, and how both of the monsters do not have names. Frankenstein also makes one question things as well because there are moral based questions in the story, that makes one wonder what is right or not. Both of these show vivid horror of a creature that can make someone scared of the creatures.

The popular word game Scrabble, invented by Alfred Mosher Butts, was a game created to test the knowledge of its players about words within their language. In the article written by Jonathan Kay, “Scrabble is a Lousy Game”, he explains what this game truly is about in its highest point. He explains that this game is not truly about the integrity of words, but how they are strung along within this 15 by 15 board created by Alfred Mosher Butts. We wanted to answer why and how this game about words is not about words, and how professional players perceive the words they are using.

Being such a popular game, many articles have popped up discussing what Scrabble is truly about in its most professional form of play. However, this article specifically discusses the integrity of this game. Many people love words because of what they represent and their meanings, not necessarily for the spelling of it. Due to this Jonathan Kay finds this game to lousy, as the name of his article presents. He believes that common people are drawn to this simply because of its usage in words, but do not realize that it is actually about their ability to memorize the words they have used on a daily basis and their ability to access more points and words with spatial reasoning. He then goes on to name “actual” word games such as Codenames, to bash Scrabble’s integrity as a word game.

This article is about how the “game-ness” of Scrabble can really affect the mind of a person or you are just playing the game for fun. Spending a lot of time on the game shows a lot of psychological references in the game where you are supposed to memorize the words and there are 8 different varieties of games that give an explanation of to the readers why they are there. All these sorts of varieties of Scrabble games are able to give readers and their family a chance to see how the game affects others minds. Scrabble is able to help people memorize words yet don’t understand the meaning of the word. People are just able to spell the word, however, they are not able to explain what the word means to the other person.

In this article, researchers study the brains of Scrabble Experts and how the brain works in its most scientific form. In previous studies, they have learned that Scrabble experts present great performance when given the lexical decision task (LDT), which presents why they are so great at Scrabble. In this study, they research their ability in symbol decision task (SDT). They had noticed that Scrabble Experts used their posterior visual and temporal-parietal regions in the brain, and not simply just those necessary for linguistics.

Scrabble players can memorize words easily, but cannot use them in a sentence. Most people that play scrabble do not know the meaning of the words they play, but they can’t remember the word itself. Scrabble players that play competitively do this because they need to remember legal words in order to get points and win. Competitive players only do slightly better in vocabulary tests on Scrabble words than most casual players, so that means that means casual players can know just the same amount as a professional. To scrabble players, the letter and the words are worth more than the meanings.

(Made in conjuction with Kang Sou Vang and Touzong Christopher Xiong)

The short story, “The School”, by Donald Barthelme, is about how this school shifts from realism to surrealism. This story gets progressively weirder as it goes on. As the story goes further along, the less real things feel. This story has lots of shifts that make one know that something weirder is about to happen.

Firstly, at the start of the story, the school seems like a real school. Everything seems normal, for instance, the narrator, Edgar says at the beginning “well, we had all these children out planting trees, see, because we figured that… that was part of their education, to see how, you know, the root systems… and also the sense of responsibility.” Barthelme makes this sound like a real school at this point in the story because he is talking about how the children are learning root systems and responsibility. In the second paragraph, Edgar talks about a strike and why he thinks that the trees and the snakes died. During the first three paragraphs, things seem odd because lots of things are dying, but it still seems normal because of the strike because it makes one feel like these things just happen. The first three paragraphs show realism, but after that, things get weirder.

To continue, things take a dramatic shift after all that. Things shifted to surrealism when Edgar says, “We weren’t even supposed to have a puppy”(paragraph 5). The reason this is where one can tell this the shift in the story is because one can infer the negatives about to happen, and Barthelme does this to shift to surrealism. Also, continuing on with the story, lots of people die and then the kids ask Edgar questions about life because of how tragic events throughout the story. The reason Barthelme does this is to continue the crazy unreal things of the story and make one question these things in the story. This story shows the difference between surrealism and realism and makes one wonder what exactly does all of this mean.

To conclude, Barthelme shows realism and how it can shift to surrealism. He shows all of this through the main character, Edgar, who shifts throughout the story with the events. This story progresses into weirder and stranger events throughout history.

In Sam Anderson’s “Just Another Game”, he talks about how some games are “stupid” and addictive. One game that he calls “stupid” is Tetris because of how it seems pointless to play, but yet it is very addictive. Another “stupid game”, is Angry Birds, and just like Tetris it seems very repetitive and pointless. Sam is very descriptive about how he finds some games “stupid”.
A game that Sam calls “stupid” a lot is Tetris. Sam says, “It is bureaucracy in pure form, busy work with no aim or end, impossible to avoid or escape”. He says this because all this game is work with no end, and because he finds the game pointless because there isn’t really an objective. Also, he says, “And the game’s final insult is that it annihilates free will”(paragraph 5) The reason why he says this is because the game is very addictive and repetitive, so we are losing the ability to stop playing this game. Tetris is highly addictive and there really isn’t an objective to the game, so it seems pointless or “stupid” to play.
Another game that Sam finds “stupid”, is Angry Birds. Sam says about the game, “Angry Birds, it seems, is our Tetris: the string of digital prayer beads that our entire culture can twiddle in moments of capture or anxiety-economic, political or existential…” He says that it is our Tetris because it’s also very addictive, but also it feels pointless to play. Sam mentions the creators of Angry Birds, and says “The Angry Birds creators like to compare their game with Super Mario Brothers. But the first and simplest level of Super Mario Brothers takes about a minute and a half

Hello! I’m Joey Norris and one of my interest is playing video games. I have been playing video games for a long time, and I will probably be playing them for a very long time. I’ll always play video games when I’m upset or in a bad mood because it distracts me from things. One of my favorite game series is “Halo”, I’ve played every “Halo” game to date and I’m always excited for the next one. Also, “Halo: Combat Evolved” is probably the first video game I’ve ever played.

My favorite game ever though is the original “Star Wars Battlefront II”, and I still play it today. I would play this game for very long periods of time when I was younger. The game came out in 2005, so I would have to play it on an older console, but not too long ago the game became backwards compatible on the Xbox One. I play on the Xbox One a lot because I play better with controllers and I’ve always enjoyed Xbox titles. I like to record game clips and take screenshots of random content from the Xbox One. I really enjoy playing video games, and it’s one of my biggest interest.